PERSONS WITH DEAFBLINDNESS AND WORK

WHAT DOES THE DATA SAY?

Only three studies included in the literature review, two from the United States and one from Denmark, examined access to work among persons with deafblindness [4, 19, 20]. All found barriers to engaging in employment, although sample sizes were small and not representative of the broader population. Some challenges highlighted included difficulties transitioning from school to work, the need for vocational training [20], and early retirement following the onset of deafblindness in older age [19].

Figure 8 compares the working status of persons with deafblindness, people with other disabilities, and people with no disabilities across the datasets. Specifically, the survey reports on whether or not the respondent has undertaken any work for cash or in-kind payment over the last 12 months. The findings are restricted to persons of working age (15 to 64), excluding those currently in education.

Excluding Uruguay, where the sample size was too low for age-stratified analysis, people with deafblindness across all age groups were statistically less likely to be working than people without disabilities in all datasets except Sudan, where there was no statistical difference in the 15 to 29 age group (see Figure 9 overleaf). In comparison to people without disabilities, the gap in participation appears to increase with age, and is most pronounced amongst older adults in high-income settings.

It is important to note that this data does not account for work security or type of work. For example, in many low and middle-income countries, the informal economy is the main source of employment. While it is easier to find informal work, employment is typically less stable, lower paid and does not offer protections for workers (e.g. sickness/accident insurance, pensions or representation) [21]. There is evidence that people with disabilities are overall more likely to work in the informal sector [21], which is therefore likely to be similar for persons with deafblindness. Additionally, persons with deafblindness may be less likely to work if they have access to social welfare and benefits. For example, in the study conducted in Denmark, while only 8 of the 163 (5%) people with acquired deafblindness between the ages of 18 and 64 years were employed, 63% were receiving the country’s disability living allowance [4].

The majority of WFDB members had a negative perspective of the efforts made by governments to ensure equal opportunities to work and employment for persons with deafblindness. Whilst half of all respondents from high-income countries stated that employment policy adequately covers the needs of persons with disabilities, only 17% felt that appropriate employment support measures were in place. Members highlighted discrepancies between policies and implementation.

WFDB members from low and middle-income countries stated that employment policies do not really consider persons with deafblindness. However, services do exist to support those in work, especially in relation to livelihood and self-employment. The differences between higher and lower-income countries can be attributed to the fact that employment in lower income countries is typically informal with little social protection support. In high-income countries, however, significant barriers to work exist in a mostly formal labour market. As a result, many persons with deafblindness may receive disability benefits, which are often determined by resource threshold or incapacity to work criteria.

A study carried out by Sense International in Peru in 2018 concluded that the main barrier to the employment of persons with disabilities, and persons with deafblindness in particular, is the prejudice of employers and co-workers. The study recommended that work placement measures should not focus on a ‘typical’ job that persons with disabilities could do, but that people are provided with support to find work that matches their profile and aspirations. It also highlighted the importance of the use of ‘internal mentors’ as an effective approach to ensure the sustainability of inclusion. The implementation of Law No. 29524, which recognises deafblindness as a unique disability and mandates the state to promote the training and accreditation of interpreter-guides to support people with deafblindness, was identified by the study as a vital development. The study also recommended the introduction of incentives to encourage companies to do more to include persons with disabilities, in particular persons with deafblindness, since current tax benefits are insufficient and have not made an impact.

WFDB members also described a range of interesting practice, such as persons with deafblindness who are in employment offering peer support and mentoring to those looking for work. 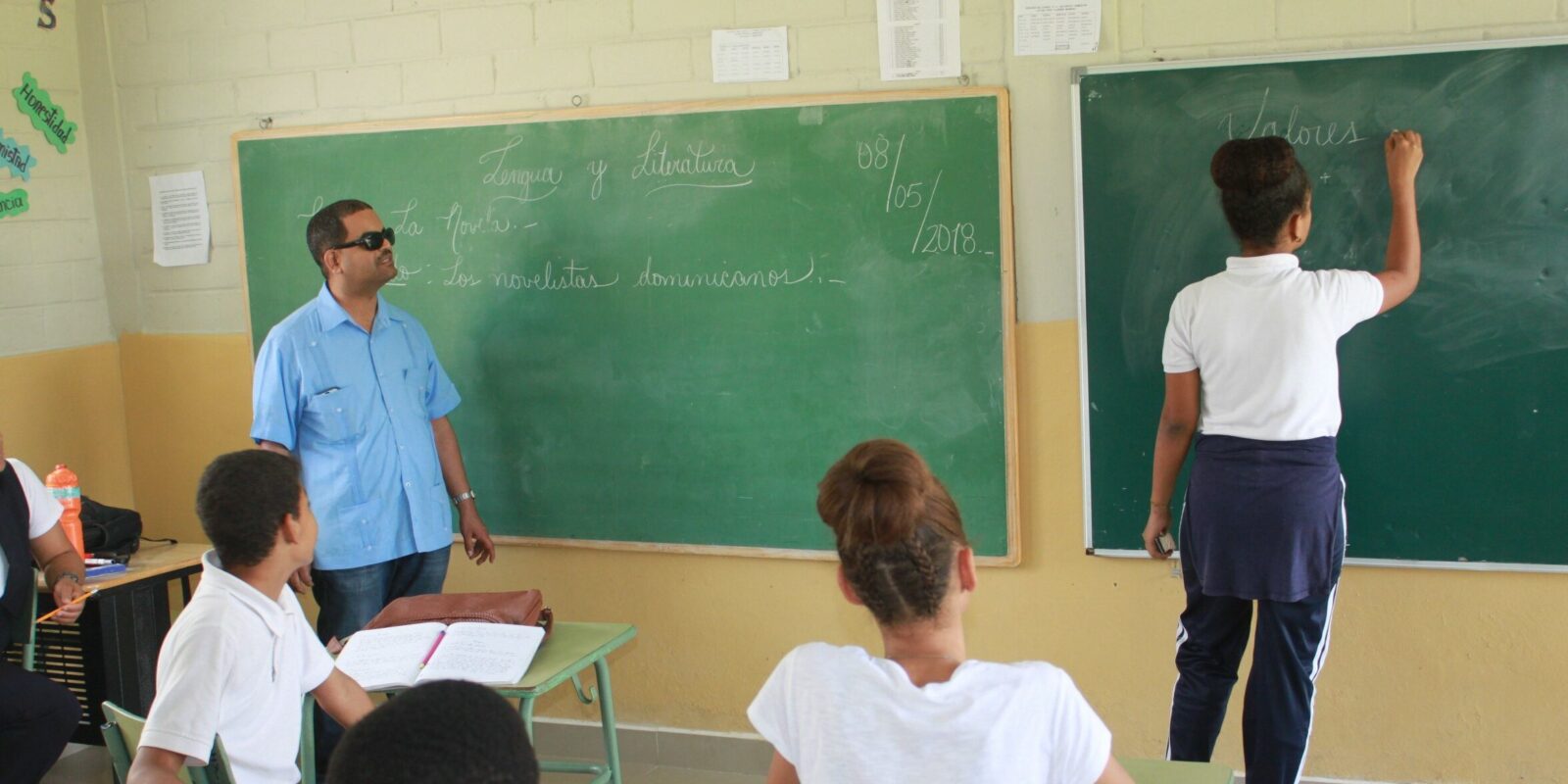 IN OUR OWN WORDS

“After working for 20 years as director of services of the unit for blind people at the National Library of the Dominican Republic, I applied alongside other professionals without disabilities to become a teacher for secondary level students. It was the first time that a person with deafblindness participated in such an application process. I got 85 points out of 100 as a result.

“In October 2015, I started my work as a Spanish and literature teacher with students of 1, 2, and 3 grade at a school named Dr Julio Abreu Cuello in my city (Monte Plata). It was a surprise and bewildering for the staff when I started; however, my interaction with the students and good relationship with the staff led to my fast inclusion within the teachers group.

“When I got to know that I successfully passed the application process and got a teaching position, I felt a mix of satisfaction and uncertainty. I asked myself: How will I have good communication with students without disabilities? What will be the attitude of my colleagues? Which strategies will I use so that my disability does not interfere with education, work and the relationship with the students?

“In an initial meeting with the director and teachers in the school, I explained the nature and characteristics of deafblindness and said that the disability did not stop me from being a cultural manager, radio, television and written newspaper journalist. I felt that I had the capacity and motivation to take on the challenge of starting as a teacher of teenage students without disabilities, to whom I could also become a concrete example of overcoming barriers and negative attitudes faced by persons with disabilities.

“At the beginning of the school year I explained to the students in a clear and simple way that I am a person with deafblindness, asking them to participate in class by speaking clearly and at a high volume. I also asked them to commit to being collaborative with me in the activities that are visual, such as checklists, supervision and discipline, management of non-accessible technology, and the use of the board. As a result, I got their active collaboration in a natural and spontaneous way.

“The main barriers were actually managing a group of 30 students, planning work in didactic units, managing class resources and mobility around the school. I agreed with the director and coordinator about working with groups of 15 students at a time, even if I had to duplicate my work. For planning, resource management and mobility, I got the support of my colleagues, my students and the administrative staff, who all contributed to my accommodation.

“To become a teacher required me to learn a lot, additional effort, creativity and imagination to achieve better communication, which in turn increased my capacities, self-esteem, autonomy, social relationships and security.

“The year after, I was assigned to another school named Secundario Madre Ascensión Nicol, and there, inclusion was even faster and easier, and became deeper and deeper.

“I think that working in the wider community environment, with the students, families and colleagues, allowed me to show them all the contribution that persons with deafblindness can make. Showing our capacities in daily action means more than presentations and speeches at conferences and media.”

CONTINUE TO DEAFBLINESS AND EDUCATION →